The MacArthur Transit Village was prominent in Oakland housing news in the first few months of this year. For those who don’t know, the MacArthur Transit Village is a large multifamily development between the City of Oakland, BART, for-profit and non-profit affordable housing developers on the former site of a parking lot next to the MacArthur BART station. The plans are big: 875 new units (including 146 affordable) with tens of thousands of square feet of non-residential ground-floor space. In general, it’s great news!

I thought now—a few months after the developer received final entitlements—would be a good time to reflect on some of what I learned from the development process. As part of a research methods course in the Masters of City Planning program, a few of my classmates and I wrote a paper about the project, which you can find here.

1. There’s a surprising amount of community support for housing in Oakland

I tend to consider people like me—pro-development urbanist nerds that celebrate density—an outlier. However, that’s not what I saw at the city meetings for the MacArthur Transit Village. If anything, two-thirds of the crowd was supportive of the project and cited the kinds of arguments—from the environmental benefits of transit-oriented housing to the need to increase housing supply at all ends of the market and increased property tax revenue, etc.— that you would hear in a city planning program. The supporters groups were a spectrum ranging from YIMBY activist groups (props to East Bay Forward), labor union members, to longtime area residents. Although these groups certainly have their differences, they each coalesced in support of the project for good reasons. Contrary to what I thought before the meetings, it isn’t just urbanist twitter arguing for smart, transit-oriented infill housing.

A few of my classmates and I wanted to survey neighborhood residents outside of the active community members present at the city meetings. In order to do this, we intercepted approximately 150 community members at intersections around the MacArthur BART station. Although this was in no way a random sampling of neighborhood residents, I think we learned some interesting things. For those who had heard of the project (about half), we asked if they supported or opposed the development. 24 supported the project, while 18 opposed. This sort of evidence, combined with the support I heard at the city meetings, gives me hope for future coalition building around a pro-development housing agenda. YIMBYs certainly leave out some important nuance from the discussion, and the views of other left-leaning housing activists and neighborhood residents could greatly contribute to a fuller, more formidable housing alliance—something that Jordan Fraade and Daniel Kay Hertz have discussed recently.

2. There is a disconnect between community needs and developer exactions

Our surveys showed that there was an apparent disconnect between what residents rated as the greatest community concerns and the exactions that the city is demanding from the transit village developers. As the table below shows, the community seems to clearly identify affordable housing availability as the greatest community problem. However, in the development agreement the city is demanding contributions for parks and other miscellaneous capital improvement projects in exchange for a density bonus. These are improvements that could instead likely come from the general tax revenue additions from the project. Instead, the city could use exactions in the development agreement as contributions to the city’s affordable housing fund or to more below-market rate units in the area. The exactions are not a lot, but every little bit helps. This is something that the city is struggling with in aggregate as well, and Oakland as a whole might be well suited to focusing developer exactions on subsidizing below market rate units.

3. Differences in project awareness is a possible culprit for this disconnect

Another interesting finding from our survey were differences in project awareness among age and housing tenure, shown in the figures below. Also, as Figure 7 below shows, residents who were familiar with the project were far more likely to have heard of the project via informal community associations rather than the city itself. In general, it seems like older homeowners were more likely to be aware of the project, and these residents were most likely to hear about the project from their neighbors or the news rather than the city itself. 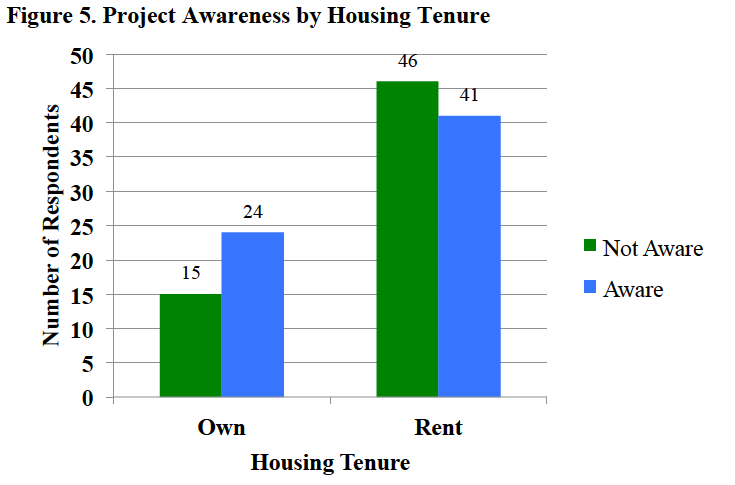 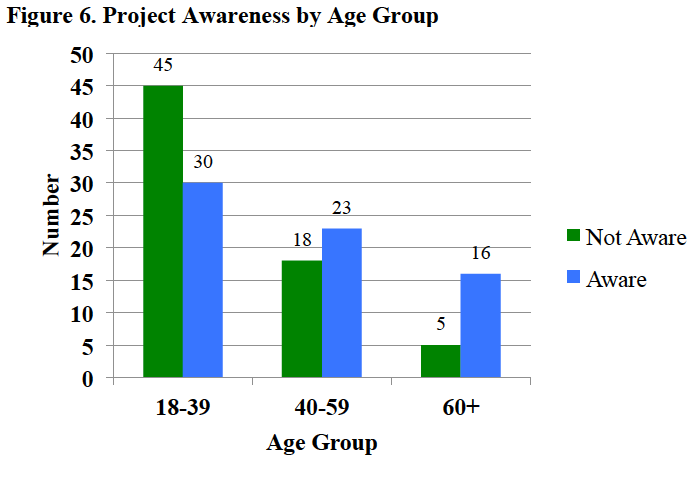 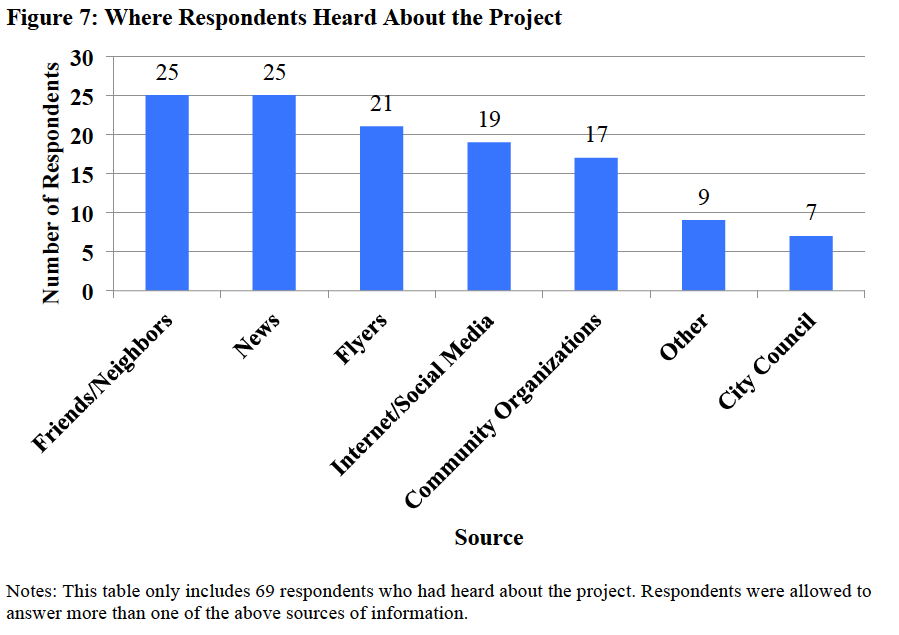 Prior to the city’s meetings to decide the fate of the transit village, the only community outreach was in voluntary community meetings hosted by the developer or the local city councilor. Older homeowners tend to be the residents with the most social capital to hear about these meetings and thus, are best positioned to influence the negotiation process with the developer. While this is of course speculation, I’d bet that this same group would be more likely to support expenditures on parks, streets, and other miscellaneous amenities rather than affordable housing. Instead, a more comprehensive neighborhood survey would likely have given a better sense of the true neighborhood priority—housing. While I don’t know the practical solution to this problem, there’s a lesson here for planners about how we reach out to neighborhood groups. In particular, there’s definitely a place for more objective information gathering about neighborhood needs.